Bob Hope and I....And the Day He Forgot! 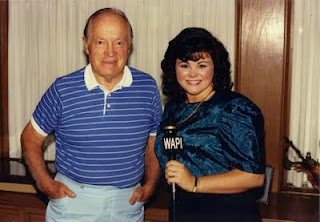 My years in talk radio were my favorite career years.  Of course my very , most hilarious, rewarding years have been being mom to my son, who will leave for college in August...( cue hysterical loud crying sounds and loads of Kleenex).  But even my years on the soap DAYS OF OUT LIVES never compared to my days on the radio.  There is something intimate...personal...just a sweet closeness that happens between a host and her guests...and especially a host and her audience.  I love the LIVE element of radio.  No going back and fixing it in post production.  Nope.  It's out there.  That made it real, and authentic and genuine for me.  I loved interviewing celebrities, showing them as just real people.  I seemed to always be able to disarm them with my Southern hospitality and actual manners we are raised on in the South.  A smile and hug hello and the ice was broken.  Well, all except the one time I flew all the way to LA from Birmingham to sit with ultra famous comedian and actor Bob Hope. And he forgot I was coming! And he was not happy to see me.


I know I am tenacious to a fault.  But, if you believe and work tirelessly, and never give up, anything is possible.  Anything.  even sitting in the home of an angry celebrity, and turning him into mush before it's over.  Thank God, he loved his Mother!
Labels: blog
Newer Post Older Post Home